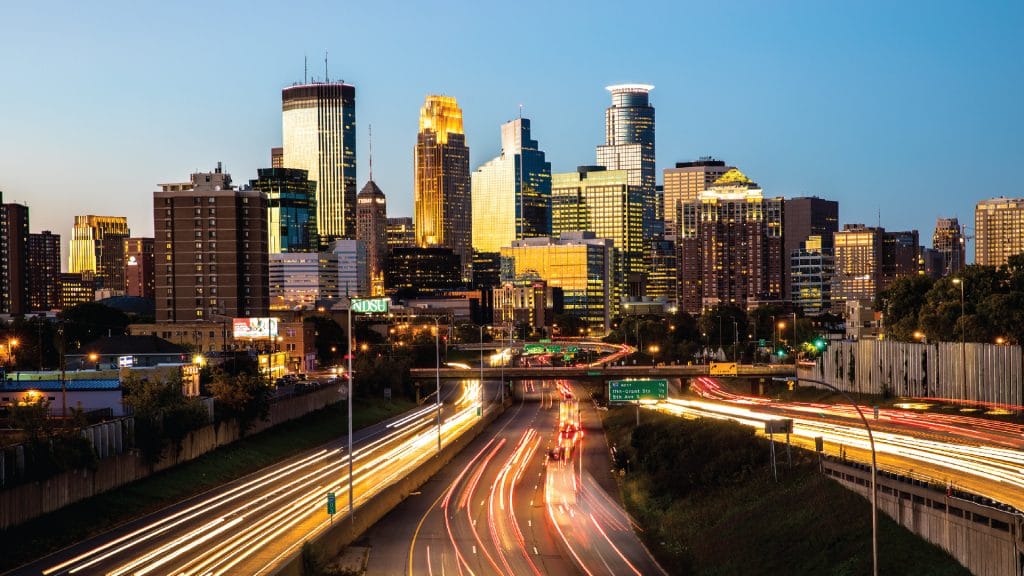 On our Wednesday 8 AM Prayer Call, someone from Minneapolis urgently asked us to pray about the tragedy that occurred Monday May 25th. A video recorded the senseless choking to death of George Floyd by one policeman while others stood by doing nothing to stop it.

I immediately thought of a word from the Lord that I’d received about God’s plan for the area. I said to the prayer call participants, “I’ll see if I can locate it, and I’ll post it later.” But without even getting up from my prayer chair, I looked into a woven basket at my feet. It contains Bibles and things I’m studying along with a couple of small note books to write prayer notes or things I receive from the Lord. There it was! 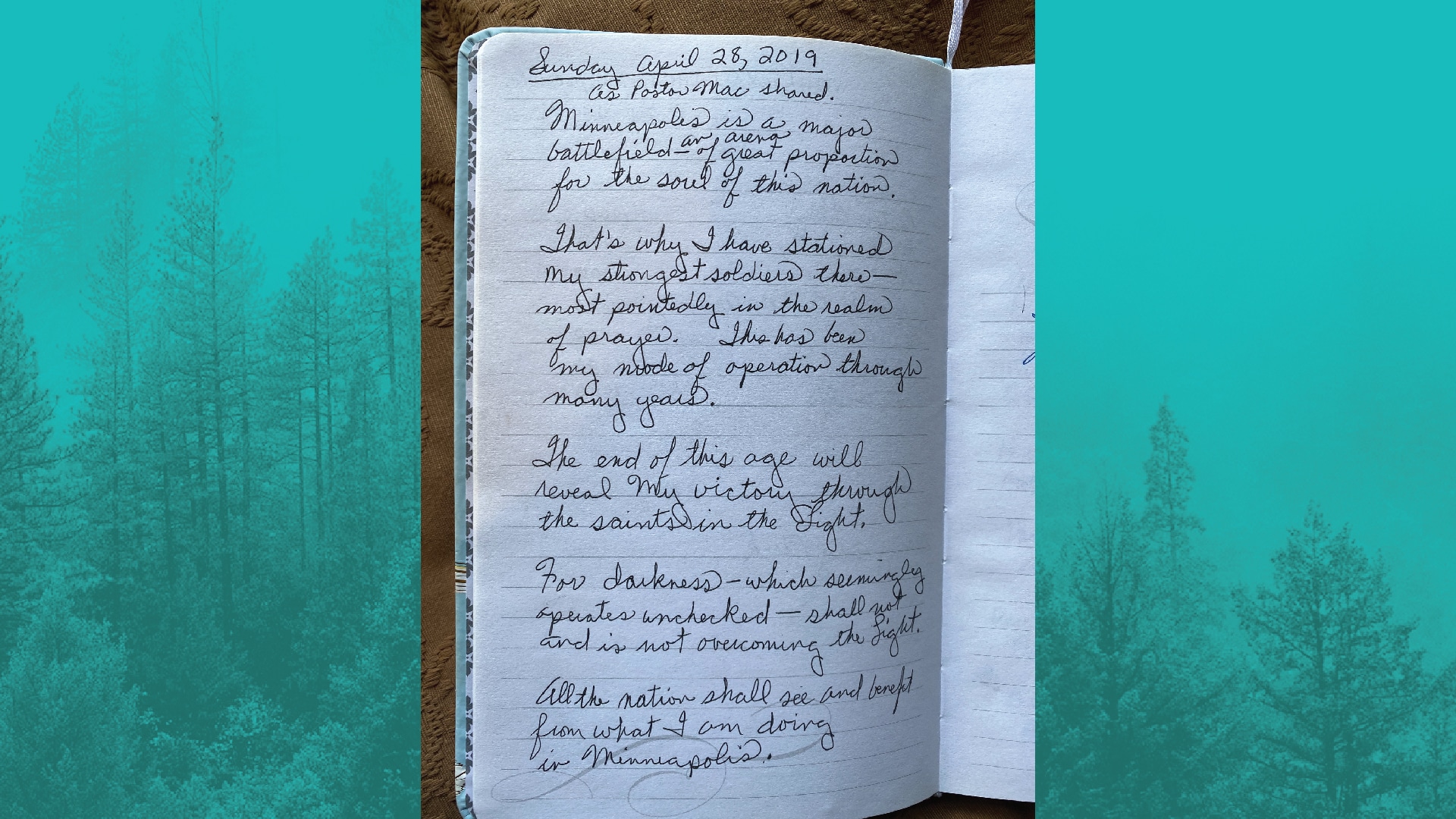 The word came a year before while I was watching the Sunday, April 28, 2019 service at Living Word Christian Center in Minneapolis with Pastor Mac Hammond preaching. He had been under media scrutiny for statements he’d made about the Lord’s working a miracle for a young boy who was thrown from the third story of The Mall of America. As I watched the following word came to me. I telephoned Lynne Hammond sometime later about it, but otherwise, I had not shared it until our prayer call this past Wednesday. Here is how I journaled it:

Minneapolis is a major battlefield—an arena of great proportion for the soul of this nation.

That’s why I have stationed my strongest soldiers there—most pointedly in the realm of prayer. This has been my mode of operation through many years.

For darkness—which seemingly operates unchecked—shall not, and is not overcoming the Light.

All the nation shall see and benefit from what I am doing in Minneapolis.

I could see it! When the word came, I immediately thought of several things, present and past, the Lord had caused me to know about His stationing prayer warriors in the Minneapolis – St Paul area.

Pastors Mac and Lynne Hammond
Right now, the Pastors Hammond, and particularly, Lynne, are mightily used by the Lord, both to pray—and to shepherd and teach powerful Spirit-led pray-ers. I can name several of those prayer warriors, but I don’t want to leave anyone out.

Phillip Halverson
And then, someone I consider to be the most powerful man of prayer I’ve ever known, Brother Phillip Halverson, lived in St Paul. (This is just my opinion for I am not one divinely commissioned to rate pray-ers.)

Lynne Hammond and I learned from this man who prayed on a level, and in a realm of the Spirit few have ever touched. In a recent blog I wrote about the space scientist Clyde McGee. Brother Halverson was used by the Lord to pray over “the birds” before he met Clyde. When the two met they discovered Phil had been praying over the groundbreaking technology God was revealing to Clyde and two other men. When I prayed with Brother Halverson it was difficult to pray. This was because I was listening. As he moved in the Spirit, words in English would come out. Often he prayed about something and you would see it in the news some weeks later.

Included here is a video so can see how this man prayed. We made this 5-minute video in an extraordinary gathering of praying saints in Los Angeles in 1983. We called it “Secrets of Intercession.” The meeting came about because of a word of the Lord to me through Kenneth E. Hagin. He’d walked into my office and told me that the seasoned pray-ers I fellowshipped with were going to start going home to Heaven. He said, “If you don’t get out of them what they have, we are going to lose it for the next generations.” Hence the LA meeting.

Dr. George Washington Carver Prophecy
This great African-American genius of science who literally saved the agriculture of the South was born to a mother who had been a slave. His “secrets” were learned from One he called, “Mr. Creator.” Rising at four o’clock every morning he communed with the Lord. And later in the day taking no book but the Bible into his laboratory he worked out what Mr. Creator had given him.

In his wonderful book, The Man Who Talks with the Flowers, The Life Story of Dr. George Washington Carver, Glenn Clark records:

“My third meeting with Dr. George Washington Carver was the fitting climax of them all. He had been invited to speak as the high point in a Crusade for Christ being put on in Minneapolis.” [The author describes the supernatural meeting in detail. In his introduction of Dr. Carver at the meeting, Glenn Clark ended with, “…no one ever sees him without a flower in his buttonhole and the love of God in his heart.”]…

“The next day I took him to the chapel in Macalester College. His address there was just as wonderful and carried us even further than the address before the larger group the night before. When he closed, they applauded till I began to wonder whether the next period classes would ever have a chance to meet. I finally raised my hand to still the enthusiastic boys and girls and said, ‘Dr. Carver has an encore. Great as he is as a speaker, he is still greater as a man of prayer…so I am going to ask Dr. Carver to put his blessing upon us in a closing prayer.

“As we rode to the station, Dr. Carver said, ‘Last night as I rode to the auditorium I was holding a little white flower in my hand all the way, and in the silence while we rode, I was talking to it and it was talking to me. It told me some wonderful things. And the flowers have never failed to tell me the truth. It told me that there is going to be a great spiritual awakening in the world, and it is going to come from people up here, from people connected with you and me, from plain, simple people who know—not merely believe—but actually know that God answers prayer. It is going to be a great revival of Christianity, not a revival of religion…a revival of true Christianity. It is going to rise from the laymen, from men who are going about their work and putting God into what they do, from men who believe in prayer, and who want to make God real to mankind.’

Personally transmitted stories about Billy Graham, Dr. Lileon B. Yeomans, Dr. Frank and Irene Lindquist and others are a part of my God-given memory bank of His workings in Minneapolis – St Paul unto this day.

With all my being I see this greatest of all awakenings and harvests on the horizon. Therefore I know that the enemy of God and man is going to do everything in his power to stop it. He too has seen how God has marked the Minneapolis – St Paul area for a great part in praying in the awakening.

So, I know, without a doubt that behind the riotous aftermath—and possibly even behind—the initial incident is the prince of the powers of the air and his cohorts.

But I also know without a doubt that these evil spiritual forces can be stopped by the believers in the area using their God-given spiritual weapons. Especially THE AUTHORITY OF THE BELIEVER. Sitting in their seats at the right hand of the Father and taking authority over the powers of the air, forbidding them to operate. This is something that has to be done daily. Not just ascribed to by head faith. But practiced by doing the Word of God.

Yes, the devil has great wrath seeing his time is short. But we overcome him by the blood of the Lamb and the word of our testimony. Combatting every word of the accuser of the brethren morning and night with the weapons of our warfare that are not carnal but mighty through God for the pulling down of strongholds!!!

Items To Help You

If you don’t have them—or if you want to give them to others, add these to your arsenal of understanding.

You can get from us the following from us. Prices are plus shipping:

The Authority of the Believer by John A MacMillan $12.00

The mini-book
The Authority of the Believer and How To Use It
by Billye Brim $2.00

The Authority Package (All Three Above Books) $20.00

The Secrets of Intercession DVD’s $50.00
The entire 9-DVD package of the seasoned pray-ers in the Los Angeles meeting of 1983. Phillip and Fern Halverson, John G. Lake’s Daughter and Son-in-Law Gertrude and Wilford Reidt, Rachel Teafatiller, and others.

Phillip and Fern Halverson two DVD’s from The Secrets of Intercession $10.00

The Man Who Talks With Flowers, By Glenn Clark
(We are currently unable to get the book from our supplier.
But you can find it online. )