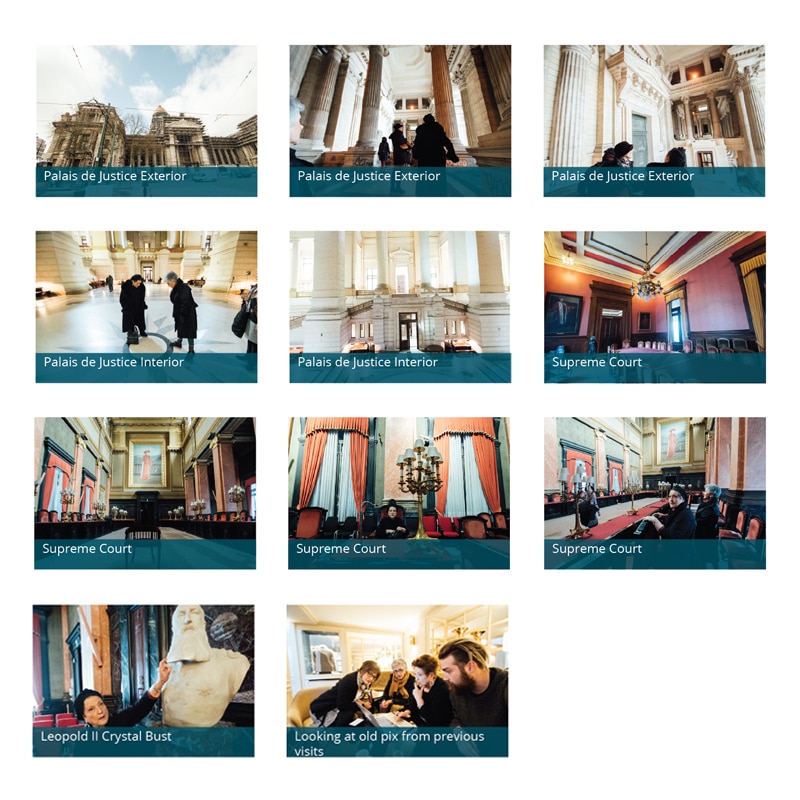 We are in Krakow in a hotel in the Jewish Quarter, but I must share with you something that happened when we were in Brussels. I just heard it today . (And, I am using this blog as a journal, so I will go into detail.)

See my previous blog from Brussels. I said that it was a miracle that we got into the Palais de Justice. Today (April 3 as I type) we learned just how big a miracle it was. This morning I received a text from Philip Rood which revealed it.

Last Thursday, March 29, Pasteur Marie-Helene Moulin, Philip Rood, Shelli and I decided it seemed good to our spirits to go to the Palais de Justice first. (A picture attached shows us in our hotel looking at pictures on my laptop from previous visits to the building years ago. We were rehearsing what we’d learned about it.)

We took a tram and arrived at the huge structure. It was built by King Leopold II and designed by the architect Pouliert as a place from which the world would be ruled. At its inauguration in 1883 it was the largest building in the Western Hemisphere. Dysfunctional from its beginning, it would take more space that I plan to use in this blog to tell you the things I’ve learned through the years about this eerie edifice.

Suffice it to say it includes architectural features from those empires that subjugated Israel: Egypt, Babylon, Persia, Rome. Now, back to how it happened that we miraculously got in last Thursday.

Since the main entrance was blocked off, we entered through an entrance to its side. Just inside there was a security checkpoint. Several people were entering just at the time we were. In looking back I can see they were of Middle Eastern descent. Some were obviously Muslim. We passed through with no problem. And Philip carried his large professional camera in a backpack. (I will ask the office to post some of his pictures with this blog.)

We went to the information desk. I asked Philip to ask them in French if we could hire a guide. They said the building had no guides, but they gave us the cell number of an English-speaking guide we might hire.

Philip called immediately. The man said, “I cannot take you today; the building is closed to the public.” Philip said, “We are here. We are calling you from inside the building.”

The guide was astonished. He said, “ You cannot be there. It is closed for….”

Philip told us that as well as he could make out, the guide said that it was closed for “something Islamic.”

Anyway, we were inside. So I started leading our little group to some places I’d been before. We walked up and down through the massive structure. I wanted to go to the Supreme Court room. So we asked a lady in the hall, an office worker in appearance. She pointed out a room we were quite near. She opened the door and said, “Close the door when you are through.”

We found ourselves in the red room of the Supreme Court that I remembered so well.
We stayed there approximately an hour. For most of the time we sat in the highest chairs and prayed quietly. Reigning as instructed in Romans 5:17. No one bothered us. One woman passed through on her way to another office. She said nothing.

At the end of the hour, I pointed out the solid crystal busts of Leopold I and his wife. An elderly guide had taken us on more than one tour to that room. He had pointed out the busts and how they were disguised to look exactly like the plaster busts of judges that lined the outer hall. But these were crystal. He demonstrated by tapping the bust of Leopold on the nose and on the beard with a metal key. We are posting herewith a picture of me tapping on the bust with a coin. It rang with the clear tone of crystal like a crystal stem glass.

NOW TODAY Philip saw an article about the trial of Salah Abdeslam. He realized this was the name the guide had told him on the phone. This is what he thought he’d heard as “something Islamic.” Salah Abdeslam, the only surviving terrorist from a terrible 2015 attack in Paris was on trial in that building while we were there.

The following is from the Internet:

2015 Paris attack suspect Salah Abdeslam stands trial in Brussels
For now, Salah Abdeslam is in court on charges relating to a police shootout in the Belgian capital in March 2016. Prosecutors hoped he would break his silence, but instead he remained defiant in court.

Salah Abdeslam, the only surviving suspect of the 2015 Paris terrorist attacks, faced trial in Brussels on Monday, where he remained tight-lipped and defiant. Authorities hoped the Brussels trial would yield clues to the attacks in Paris that killed 130 people, as well as to the suicide bombings in Brussels, which claimed 32 lives… The hearing was adjourned until Thursday to give Abdeslam’s lawyers more time to prepare… The trial is scheduled to last four days, during which Abdeslam will be transferred between Belgium and France every night. After Monday’s defiant hearing, Abdeslam was immediately transferred back to Vendin-Le-Vieil prison in northern France.

We believe the Lord caused us to be praying there while the trial was going on. We also believe it was significant that Pasteur Marie-Helene, a French citizen, was with us as we exercised our “ministry in the heavenlies.”